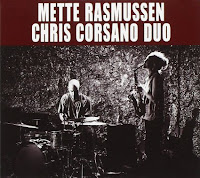 This very interesting album is a duet performance featuring Mette Rasmussen on alto saxophone and Chris Corsano on drums. Recorded in Brooklyn in 2013, the music is for the most part freely improvised, but still quite accessible and well rounded. “Train Track” opens the album with raw saxophone and spare percussion as the duo begins to probe the open space around them. They move the pace of the music up several notches to make way for squalls of saxophone and strong pummeling drums. The speed and power with which the musicians play on this selection make it hard not to make (favorable) comparisons to John Coltrane and Rashied Ali’s Interstellar Space album. Crosano opens the short and exciting “Contester” with a blast of percussion before Rasmussen’s saxophone comes in with a wailing and powerful attack, and the music carries on from there, with a brief burst of powerful thrilling music. “How Many Of These Things Do We Need Anyway?” has a tight duo setup, opening with the musicians playing off against each other in a way that works very well. They are deeply engaged with each other and open to exploring the freedom that is available to them musically, eventually building to a section where the improvisation builds to a scalding tempo. There is a quiet conversational opening to the wonderfully titled “Exploding Foods” where the musicians are calmly circling and patiently looking at the nature of the music they are making and their relationship to it. Rasmussen develops long tones of saxophone while Corsano’s drums roll on underneath and they develop a fine series of tension and dynamic release. “Dots......(for Paul Flaherty)” has ratting free and open drumming with brief hints of saxophone ducking and weaving around them. Their dynamic acuity is at play here as they are able to stretch the space and time of their dynamic meeting, juxtaposing milder sections against faster and more complex ones. Rasmussen’s saxophone is the centerpiece of “O Space Heater! My Space Heater!” where she spends much of the performance unaccompanied or with minimal support, developing raw scrawls of noise and tone and long peals that sound like warning sounds in the night. This was a meeting of the minds that worked quite well. The spontaneous performances here are well integrated between the musicians who work very well as a team but also take the imitative to make their own individual statements heard. Mette Rasmussen and Chris Corsano ‎- All The Ghosts At Once - Relative Pitch Records