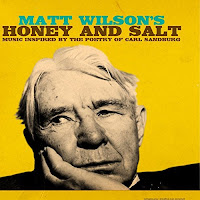 Drummer Matt Wilson has long been fascinated with the poetry of Carl Sandburg, as evidenced by one of his earlier solo albums, As Wave Follows Wave, which was named after a Sandburg poem. This album focuses on the poems, with sections of spoken word and singing backed by an excellent group that features Christian McBride, John Scofield, Bill Frisell, Carla Bley, Joe Lovano and Rufus Reid speaking the words of the poet, in addition to Dawn Thomson on vocal and guitar, Ron Miles on cornet, Jeff Lederer on reeds, harmonium and voice, Martin Wind on bass and voice and Wilson himself on percussion and voice. The vocals/spoken word and the instrumental play mesh well, beginning with "Spoon" whose slightly goofy lyrics are sung with a wry wink to a gently swinging beat and rhythm. "As Wave Follows Wave" is reprised with a stoic multi voiced reading, and the moody "Night Stuff" has room for an excellent extended cornet solo from Miles, leading the band through dark and noir scented passages. "We Must Be Polite" has a bright and swinging feel, and the improvisation tumbles joyously forward, and the off-kilter rhythm and strongly riffing horns framing the spoken recitation, and then uncorking a raucous saxophone solo. They use Sandburg's own voice juxtaposed against Wilson's light and rolling percussion on "Fog," perhaps one of the poet's most well known creations (the fog rolls in on little cat feet...) Wilson's martial drumming launches "Choose" into a rattling clanking full band march, with chanted vocals leading the music forward, making for one of the most exciting pieces on the album, as thick bass and ever-shifting drums pushing the tempo faster and Lederer's flute bubbling up from the mix. Wilson's drum solo is excellent, and the other instrumentalists fall back into line crisply leading to a pinpoint conclusion. There is a backporch acoustic country song called "Offering and Rebuff" with Dawn Thomson's beautiful voice and acoustic guitar leading the band though a respectful performance, before heading to deeper waters on "Stars, Songs, Faces," where the stoic instrumental passages include brushed percussion framed by horns and lilting vocals. "Snatch of Sliphorn Jazz" has the gravelly voice of Jack Black intoning the lyrics, before the band crashes in with taut drumming and soprano saxophone leading the way. Lederer and Wilson duet in a raw and exciting fashion, making the most of the improvisational space to inject some exciting modern jazz into the proceedings. This album was clearly a labor of love for Matt Wilson, and that comes through in the attention to detail paid to both the rendering of the poetry and lyrics and the arrangements for the instrumentalists. Honey and Salt - amazon.com