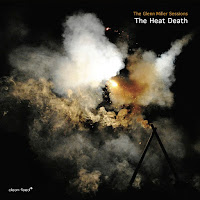 This is the second sprawling triple album that Clean Feed has released this year, and it works equally as well as did the impressive Gard Nilssen Acoustic Unity three CD set. This particular group consists of Kjetil Møster on tenor saxophone and clarinet, Martin Kuchen on alto saxophone and flute, Mats Aleklint on trombone, Ola Høyer on bass and Dag Erik Knedal Andersen on drums. I'm not sure what the connection is to the instrumental pop of the Glenn Miller band, because this is state of the art modern and free jazz, played with power and energy to spare. The album opens with parts one and two of a longer work called "The Myriads of Space" which makes more sense because the music is spiritually connected to The New Thing jazz of the 1960's, and this group takes the questing nature and the search for freedom that was inherent in that movement, and expands upon it mightily, with huge expanses of collective improvisation that is played at high speed and volume, giving the overall sound of the band a brawny bravado that works quite well. They sound bigger then a five piece group, partly due to the multi-instrumental nature of the reed players, moving between different saxophones, flute and clarinet can vary the hue and context of the pieces allowing for a great range of variety and negating any feeling of fatigue that the listener may feel when taking on a three hour plus collection of avant-garde jazz. There is a humor to the music that provides further levity, as can be seen by some of the other titles in this collection, "The Unservable Jazz Soup," "Towards the Uncool" and "The Clandestine Jazz Operation" which shows that the group doesn't take itself too seriously while at the same time creating music that is simultaneously accessible and experimental. Each of the five musicians is very talented in their own right, Moster leads a self-named group while Kuchen has played with and collaborated with a wide variety of musicians both on the fertile Scandinavian scene and beyond. The rhythm team of Hoyer and Knedal is more then up to the task, providing strong beats when necessary and also accenting and framing the improvisations in such a way as to ensure maximum creative freedom for the group as a whole. The addition of Aleklint on trombone is crucial to the music's success, adding another solo voice as well as a brassy heft to the ensemble and collectively improvised sections, giving them the feeling of a little big band at times, but while still maintaining the nimble shift on the fly small group identity. Overall this is a fine collection of modern free jazz and should be gratefully accepted by fans of such music. The music is strong and virile, adding just the right amount of dynamic range to keep it interesting over the long haul. The Glenn Miller Sessions - amazon.com